Words like “entrepreneur” and “innovation” are synonymous with Silicon Valley. They’re part of the reason the greater Bay Area draws tens of thousands of hopeful applicants to its open tech positions each year — positions sprinkled across companies whose very names have become cultural icons. We’re looking at you, Google.

Forget chugging soylent, though. We’re giving a taste of the best companies to work for in Silicon Valley and the broader Bay Area right here, with a particular focus on the tech juggernauts revolutionizing the modern working world as we know it.

We’ve ranked the best-of-the-best tech companies according to the following:

What Is It Like to Work in Silicon Valley?

The spirit of Silicon Valley is single-to-none, inspiring professionals at all career levels to pack up and move to the tech hub of the world. What can aspiring tech workers expect once there? A few characteristics include:

When wondering what it would be like to work for a tech company in Silicon Valley, consider the following three questions.

What Skills Are Tech Companies Looking For?

Across the board, today’s best tech companies state they desire the following in their employees:

How Difficult Is It to Get a Job in Silicon Valley?

Job searching in Silicon Valley is no cake walk. According to data released from Indeed’s annual Silicon Valley Spotlight study, tech job postings in San Jose and San Francisco fell by 6 and 8 percent respectively in 2017. Some big players, like Google, regularly receive over two million job applicants every year.

However, the Bay Area alone accounts for more than 30 percent of all tech jobs in the United States. A region comprising over a third of an entire industry won’t be going anywhere anytime soon. Companies like Apple, Amazon, Oracle and more have actually increased their hiring rates over the past two years.

What Makes a Company the Best or Most Sought After to Work For?

What makes a company the “best” is subjective. For those in the tech industry, there’s a push and pull between speed and stability, innovation and endurance, short-term creativity and long-term, cross-organization health. Companies that balance these characteristics — and do so authentically, without sacrificing worker wellbeing — will earn the title.

So what are these title-earning best places to work in Silicon Valley? We’ve ranked the top 10 with great perks, great leaders, great career advancement opportunities and many more amenities to form our list.

Google continues to define today’s tech-centered epoch. Its Mountain View headquarters — known as Googleplex — houses around 12,000 employees, which is enough to form a small town. Indeed, you could say Googleplex operates like a town, with in-office amenities and features that consistently ease the work-life balance of its employees:

Zoom was ranked #2 in Glassdoor’s 2019 best places to work — and for good reason. Employees cite a Goldilocks-sized — albeit quickly growing — company with generous support programs and benefits, not to mention one of the leading cloud-based remote conferencing suites on the market. Pros and cons include:

Start An Application For Zoom

Salesforce maintains some of the progressive benefits packages in Silicon Valley, including health coverage for things like IVF treatments and acupuncture to commuter reimbursement stipends. Many insiders say Salesforce is one of the only Silicon Valley giants to truly live up to the work hard, play hard mentality so enticing in the industry:

When “humor” is among your company’s core values, you know you’re in for a different kind of workplace. Many are drawn to working at LinkedIn because of its signature culture, which, alongside humor, promotes transformation, integrity, collaboration and results:

Past and present DocuSign employees rate DocuSign as particularly work-life adept, meaning they feel the company’s culture supports healthy expectations for time on and off the clock. That balance is fueled by a startup-like office buzz, even amidst DocuSign’s recent IPO transition. Other pros and cons include:

Check Out Open Positions At DocuSign

Elon Musk’s business brainchild has already revolutionized electric cars, batteries, clean energy generators and storage systems. Tesla’s dedication to a “green future” even has the company setting sights on the stars — literally — working in conjunction with NASA and SpaceX to launch the first commercial-operations crew into space. Pros and cons of working for Tesla include:

The ultra-popular streaming service is a hit with its employee base, as well — but a specific type of employee. Proudly proclaiming its high-performance, high-results atmosphere, Netflix encompasses the proverbial Silicon Valley startup where employees are expected to work fast and hard every day.

Apple consistently lands amongst the tech industry’s top places to work. Its brand is synonymous with innovation and Silicon-Valley sleekness, something other companies pay big bucks in attempts to replicate:

Check Out Job Opportunities At Apple

Cooley has never dipped out of the top three law firms, according to Fortune 100’s Best Companies to Work For. Employees rave about the firm’s upbeat, purposeful and downright fun atmosphere:

HP has been revolutionizing print, ink and graphics products for decades. Age hardly negates innovation, though. The company prioritizes its employees above all else, stating their belief that top-notch employees create top-notch products and — ultimately — propel their success. Pros and cons of working for HP include:

How to Apply for a Job to Work in Silicon Valley

Now that you have a better sense of what it’s like to work in Silicon Valley, how do you get your foot in the door? Landing a job with one of the top tech companies in the Bay Area requires a few strategies as unique as this region: 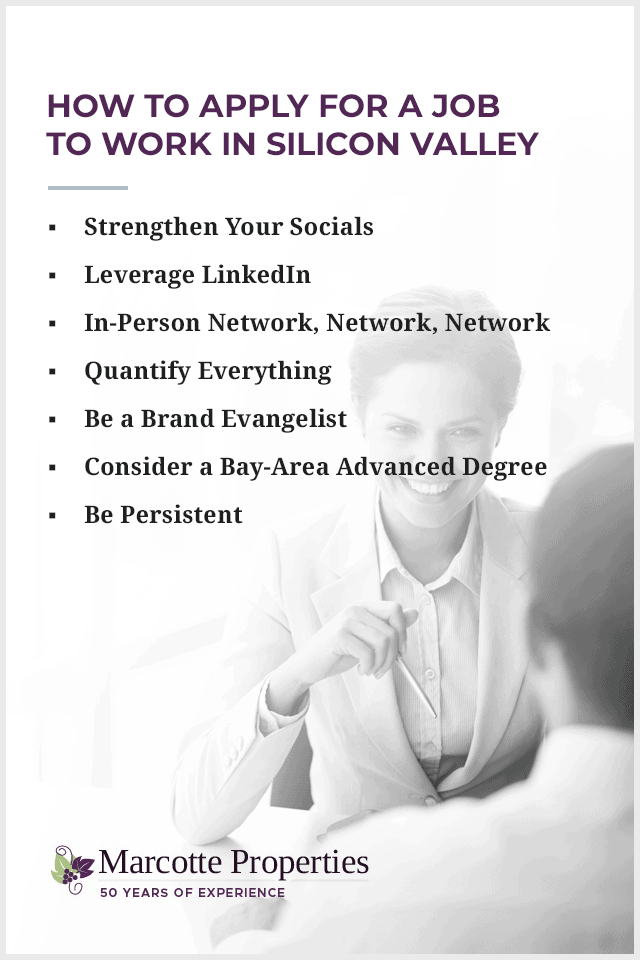 Job Hunting in Silicon Valley? We Can Take Finding Somewhere to Live in the Bay Area Off Your Mind

Review our rental listings and set up a tour today.

Everything You Need to Know Before Moving to the Bay Area

How Much Money Do You Need to Make to Live in San Francisco?

I have lived at Bart Plaza for 10 years. It is a nice, quiet, and clean place to live and the staff is very helpful.”